Advantages and disadvantages of using mobile devices at English classes

Abstract: The article examines advantages and disadvantages of using mobile devices at English classes. Mobile devices can help connect students around the world and expand their knowledge, especially in learning new languages, by practical application of their skills with a native speaker. Mobile phones allow students to work in groups and easily share information. The speed of modern mobile technologies is being grown every year and penetrates into all aspects of life, so this technology plays a vital role in the study of various aspects of knowledge. We can provide a richer learning environment with mobile phones for those who study languages. The authors conducted a survey among students of various age categories who successfully use mobile phones to learn English. Mobile phones have ever-increasing features that most students have extensive experience with, as this does not require special knowledge.
Keywords: educational tool, non-academic purposes, educational or reference apps, expand one’s knowledge, native speaker, respond, academic performance, mobile devices, benefits and drawbacks, profitable

Advancements in technology brought us vast of opportunities and they played crucial role in education development. Mobile phone is one of the widespread gadgets, which every student has. The purpose of this research is to discover the influence of mobile phones on students in different cases. Using mobile phones during the classes has both beneficial and negative consequences. Nowadays a lot of high schools are torn between a choice of banning or allowing mobile phones in the classroom. Some schools agree that mobile phones are useful and educational tool. At the same time, increase of using mobile phones leads to the decreasing of academic performance and it is usually used for non-academic purposes.

According to Neilson’s research today digital devices are utilized by students of all ages. In 2011 the ownership of mobile phones between 13-17 ages is 58% and this statistics is being grown with a staggering rate every year. Different studies discovered the impact of mobile devices on students.

So mobile phones could be an available and valid educational tool. Apple Company noted that 1.2 million free available apps that had been downloaded in 2015 and over 10 percent of them are educational or reference apps, about 150,000 apps are particularly geared toward students in a wide range of subjects. For example: ‘Brainscape’, ‘Ready4 SAT’, ‘edx’ and etc. Additionally, equipping your classroom with these apps enhance the new ways of learning materials, for example game-like apps. Moreover, smartphones can provide student with various suitable functions as calculator, camera, remainder and etc.

Sharing the experience. Internet access can help to connect students all over the world and expand their knowledge, especially in learning new languages by practicing their skill with native speaker. Mobile phones can allow students to work in groups and easily share the information. [1]

Performance of tasks. In research “Using Smartphones in the Classroom” Edward Graham explored that the access to mobile phone increases homework performance among the students. He has provided his students with apps and websites for homework and tasks. As a result, task performance is increased and it allows parents to get more involved in students’ academic life. [2]

Health and fatigue, sleeplessness. Punamaki studied and found that ‘intensive mobile phone use lead to more health complaints and musculoskeletal symptoms in girls both directly and through deteriorated sleep, as well as increased daytime tiredness’. [5]

Entertaining purposes. Many scholars (Gergen, 2002; Halpen, 2003; Franzini, 2002) approved that mobile phones disturb students during lessons. Students use gadgets for playing mobile games, social networking and etc. This process undermines the control over the students and effect on their level of academic performance.

Information content. In our society, sexual activities and violent acts are considerably being developed day by day. Through mobile phones everyone can access this information. ‘Most youths of today are highly influenced and so much affected by what they watch on the social media sites, over the internet that one can easily see the consequences in their academic performance and life styles’. [6]

This research contains both primary and secondary research methods. Secondary research method was used to collect data around this topic in order to investigate research with different perspectives and understand the problem on global level. Used reliable sources which have the relevant content for my chosen topic such as educational, government approved websites or scientific articles/research materials have been done before. As a primary research I decided to take survey in order to collect information on the local and personal level. Out of approximately 700 students attending the high school, a total of 18 responded for this survey. The survey is semi structured, consists of eight close and open ended questions. For data analyses statistical analyze described below was used.

100 people were responded in this survey. All of the respondents had mobile phones. Majority of participants was between 14-18 years old, 94% were representatives from secondary and high school and 6% were between 7-13 ages. More than half of the respondents (61%) use their phones during the classes only sometimes; other 22% often and 17% usually use their phones at classes. About one-quarter (28%) of respondents are distracted from studying due to mobile phones. Nearly half of the questioned students 44% use cell phone while studying, 22% do not use and 33% of students use phone sometimes. 33% responded students think that mobile phones positively effect on academic performance, another 33% answered opposite and other 33% thinks that it does not effect on the marks. The average number of usefulness of having mobile phones during the classes was rated between 3.83 out of 5 shown in the table 1 below. Students use their phones mainly for educational purposes, shown in the table 2 below. 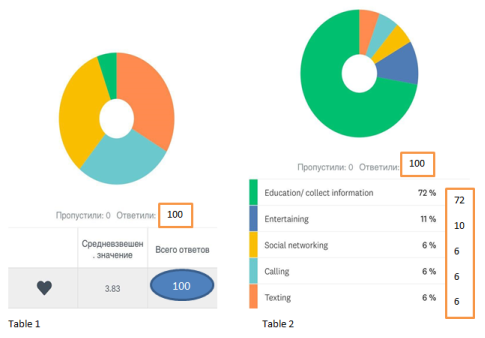 Many students have recorded images, video, sound, take notes, use GPS technology and mapping software to record information essential to their work in class. Students have formed a study group for 5 – 10 students in the classroom where they could use text messaging services to discuss on a specific subject. Students have used their mobile phones to access electronic text books online. Some schools have digitized their libraries, which helps their students access these libraries via the internet. Some students could buy these e-text books online and read them from anywhere on their mobile phones.

In the conclusion it is necessary to say that mobile device usage significantly effects on academic performance among senior secondary school students, age difference was not an important factor in using mobile phones on academic performance among high school and secondary school students. From the survey, I found that students mostly use their mobile phones for educational purposes and this process can increase the academic performance of students, which means that mobile phones could be used as efficient educational tool, but some of the respondents reported that sometimes mobile devices could distract them from the study because of its entertaining function and access to a lot of useless information. Additionally, some students added that mobile phones could be used as a cheating source during the tests or exams.  This fact validates arguments and assumptions mentioned above and they approve my perspective about benefits and drawbacks of students having mobile devices in the classroom. So here we can see that using of mobile phones during the classes can be really profitable in educational system, if student will use it straight for given purpose. In order to prevent disadvantages of this process school administration can limit access for some entertaining, social network or potentially dangerous web sites.